We seem to be entering a period of Windows development where we can expect new features and tweaks to come to the operating system several times a year. To that end, Microsoft continues to add, remove, and generally experiment with Windows 11 features and user interface through its Insider Preview channels.

This time, Microsoft came up with a modified version of the taskbar with taskbar overflow when users have too many apps open at once. Just click on the icon with three ellipsis on your taskbar, and a new icon overflow menu will open, allowing you to interact with any of these additional icons in the same way as if they were displayed directly on the taskbar.

This would be a big improvement over the current overflow behavior, which dedicates a space icon to show the icon of the last app you interacted with, leaving the rest inaccessible. This icon will continue to appear on the taskbar alongside the new icon with three ellipsis. Microsoft explains that app icons in the overflow area will be able to display jump lists and other customizable shortcuts the same way as any other app icon in the taskbar.

Sent by Microsoft
We’re reintroducing taskbar overflow, with a newly designed experience for Windows 11. This taskbar experience has been thought through to give you a more productive switching and launching experience when space is at a premium. Your taskbar will automatically enter this new overflow state when it reaches its maximum capacity. In this state, the taskbar will provide an entry point to an overflow menu that allows you to view all of your overflowed applications in a single space.

The overflow menu will contain many of the current taskbar behaviors that users are familiar with, such as pinned app support, jump list, and expanded UI. After invoking the overflow, the menu will close once you click away or access a request.

The taskbar will provide an entry point into an overflow menu that allows you to display all of your overflowed applications in a single space.

Other improvements in this build include an improved Nearby sharing feature which uses a combination of UDP and Bluetooth to locate nearby devices on the same local network. These changes only apply when you’re connected to a network set to “Private” and when using Windows’ built-in sharing window to share files, and they’re also available in the latest beta channel builds.

Device discovery via Nearby sharing when sharing a local file from desktop, file explorer, photos, screenshot tool, Xbox and other apps that Use the built-in Windows Sharing window have been enhanced using UDP (the network must be set to private) with Bluetooth to discover nearby devices. You will now be able to discover and share more devices, including desktop PCs. 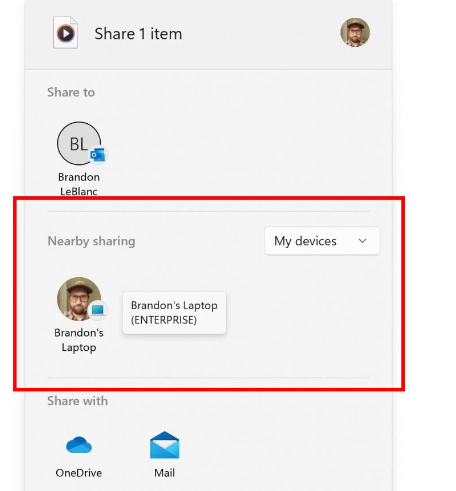 You can now discover and share with more devices with Nearby Sharing through the integrated Windows Sharing window.

Please note that this feature is currently only available for Microsoft accounts. A user will need to switch their Microsoft account through the upper right profile icon in the sharing window if signed in via AAD. AAD support will be added in a future update.

This version also comes with many fixes, including:

Features tested by Microsoft in the Dev Channel are those that are least likely to reach all Windows users. We’ve seen features like a desktop search bar come and go before, and Microsoft is experimenting with at least two different ideas to put a version of Windows 10’s search box back in the taskbar. The company is also in A/B testing for many of these ideas. Which means they will appear for some Windows insiders and not for others.

A/B testing (or A/B testing) is a marketing technique that consists of offering several variants of the same object that differ according to a single criterion (for example, the color of a packaging) in order to determine the version that gives the best results with consumers. This is a technique particularly used in online communication where it is now possible to test several versions of the same web page, the same mobile application, the same email or an advertising banner in order to choose the most effective one and use it widely.

If the taskbar overflow behavior reaches the Beta channel or the Release Preview channel, then at that point we’ll know it’s (probably) intended to reach the public.

What do you think of this behavior?